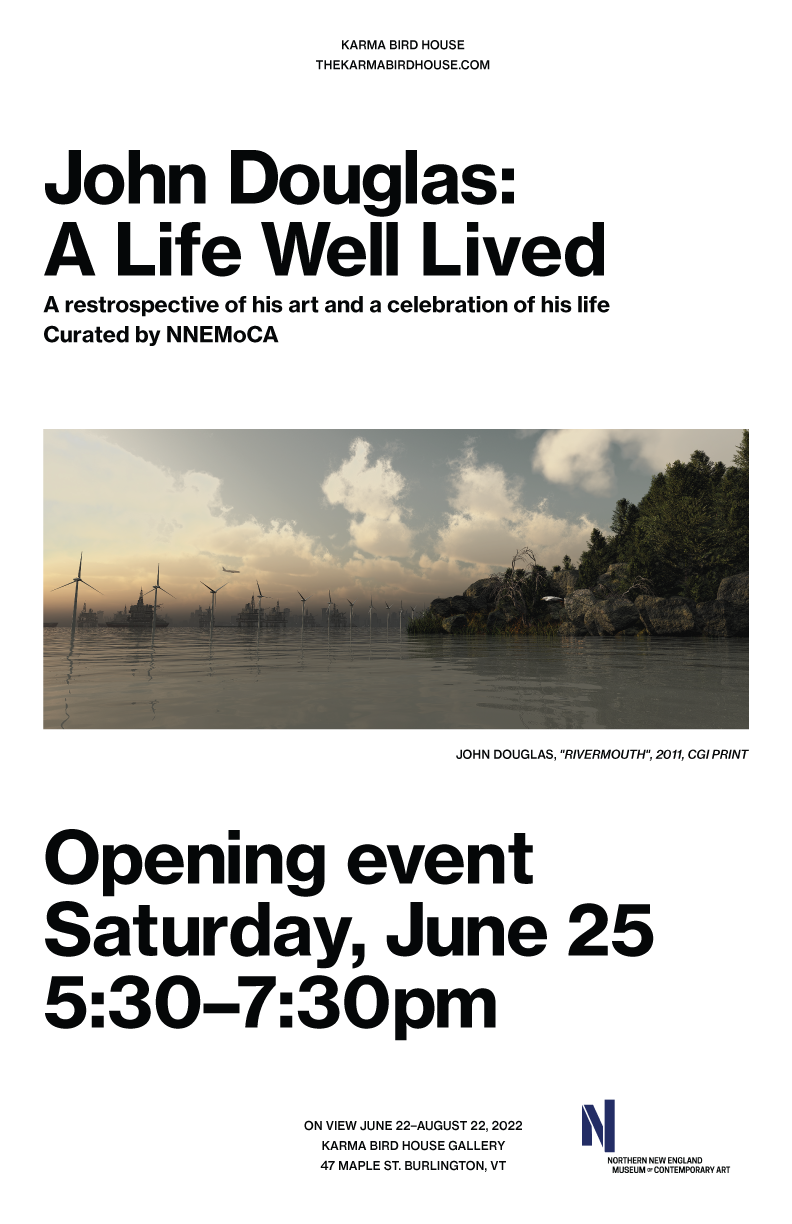 This exhibition is curated by NNEMoCA.

John Douglas’ creative life spans decades, includes multiple media, and covers his irreverent, activist beliefs as well as his Zen-like appreciation of the world around him. He called himself a “Truth Activist”. Douglas leveraged his background in visual arts, which began with predilection for abstract expressionism, included twenty-five years as a filmmaker, followed by an early enthusiasm for the Mindset computer and reached a crescendo with computer-generated imagery (CGI) unceasingly addressing injustice, hypocrisy at the highest levels, unjust wars and climate change.

As a young artist John explored “op-art” and abstract expressionism. Long before Photoshop, he created seamless altered photo montages that were far ahead of their time. His deep concern for our world drew him to narrative filmmaking as a tool for change. He was a founding member of “Newsreel”, a collective film production organization focused on political issues from 1967, at the height of the Vietnam War, until Newsreel transformed into Third World Newsreel in the mid 70s. In the 60s Newsreel developed chapters around the county, and produced numerous films addressing draft resistance, the anti-war movement and racial inequality among other issues. Special awards went to People’s War, a film John and other members of Newsreel made in North Vietnam. The Summer of ’68, which John filmed, remains a singular testament to a generation’s frustration with an unjustifiable war.

In 1983, after filming the successful and popular revolution in Grenada, “Grenada, The Future Coming Towards Us”, John faced a turning point. The US had invaded the island and had killed most of the visionaries that he had met while making the film. Discouraged about film’s ability to change the world, John turned to new avenues of communication. His facility with technology, along with his prodigious talent translated well to digital animation and CGI. The computer provided him a new visual language. For years he made award winning, experimental animations, always with a distinct political slant and each one expanding upon his mastery of developing technologies.

In the last decade of his life John began to explore some of the single frames that were generated by his animations. He extracted the most powerful moments and created exacting and precise images. He said he came to realize how little he had known about the world around him until he started working with the atmospheres, textures, and surfaces of the natural world. The results were so realistic that occasionally viewers would ask where a “photograph” was taken, or would mistakenly believe they knew the location.

John also took thousands of photographs. As he said himself, he spent fifty years looking through a viewfinder. This exhibition examines the breadth of John Douglas’ printmaking and provides examples from most of his series: Op Art, early posters, stills from political films, Homeland Security, Autowarming, Rox, and Ojihozo, as well as other works.